I just found an artist had copied my work and sold it locally. When I first saw the image of him standing proudly with his painting and offering it for sale on a neighborhood FB page, my heart sank.
Since I have worked for over a decade on building a recognizable brand, you can understand how annoying it is to have my work stolen and sold overseas (China sells tons of DawgArt prints without my permission) and pilfered by artists here in the U.S. I'll come back to this local artist in a moment.
When I was in art school, I did a lot of what were called 'master copies' or 'studies'. This is when an artist will find a painting they would like to copy as a learning exercise, to practice style, composition, paint application, etc. It's actually a very valuable learning tool. I advise any budding artists to make as many master copies as possible. It's the best way to learn from people who know what they're doing. BUT, to sell prints of those paintings, or to take credit for them, is wrong.
When I was a student in 2011, I found a lovely equine painting by Annrika James, and completed a study of the painting as part of a media techniques class.
Here's the original: 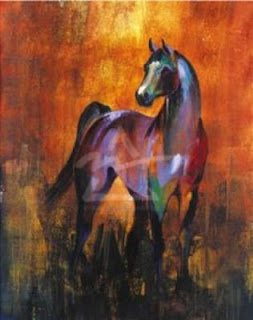 And here's my copy: 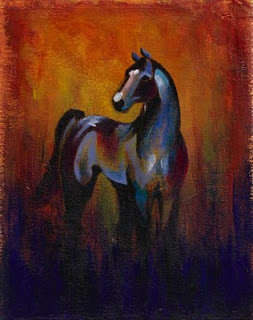 Obvi, hers is better. It has more verve, better paint application, better color. It's probably oil, and it probably wasn't 8x10 inches. But I don't actually know that much about it, because there isn't a large body of work by the artist available online. As far as I know. And I TRIED to find out.
My study turned out okay. I like it. I actually had a lot of people ask me if they could buy a print of the piece. Obviously, I never sold prints of the painting. Because it wasn't mine. The image belongs to Ms. James.
Another time, when I was in school, our teacher had us do a painting of a statue, as an exercise in value rendering. I legitimately thought the statue we were painting was an Ancient Grego-Roman piece of artwork. So when I finished the painting, which I thought was pretty cool, I sold prints of it. Later, I was contacted by an artist who was a little put out that I was selling copies of his work. He explained that the statue was a digital render (not a real live statue, but pixels only, and AMAZING because I thought it was real) and my painting was too close of a copy for him to feel comfortable with me selling his work. He asked that I remove any print listings and provide an accurate attribution. I did so immediately
Fast forward to almost exactly five years to now. I've had many people copy my DawgArt paintings and sell them, or manufacture prints of my paintings without my permission and sell them. OUCH. I even had one animal rescue organization ask me for a donation for their annual art show and when they invited me to look at an online album of their 2015 art show, look what I found in their album: 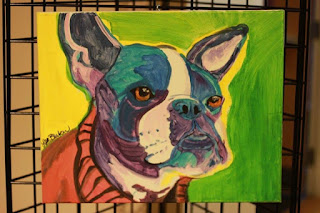 And just to refresh your memory, or if you haven't pored over ever single painting I've ever done ;), here's the original: 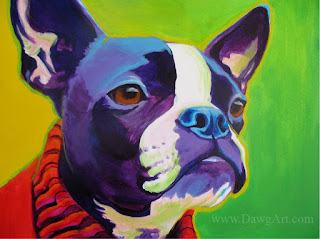 I pointed it out to the donation solicitor in my reply email and she said, "I don't even know what to say." Since it was a donation to charity (something I do a lot), what could I really say about it? I look at it as a master copy. They aren't selling prints after all. And the rescue had nothing to do with it.
So, back to the artist I ran across today, selling copies of my work. I'm not talking about copying my style, which I don't even consider to be a thing. There are hundreds of artists, if not thousands, around the world, painting animals in arbitrary color. I know a few of them. I'm talking about looking at a painting I made and painting a copy of that painting, using the same colors, etc., onto a new substrate and selling it. Granted, this artist did add his own flair in the background, but the subject dog was recognizably copied from DawgArt.
I ran through the post comments, finding lots of requests for custom paintings. Blergh. I commented in the post that the art was a copy of mine, and added the original image. Then I visited his art page, found ANOTHER painting that was copied from DawgArt, and I messaged him, kindly asking him to please give credit where credit was due. I didn't ask him to stop selling the work, only to give me credit and to let people know about DawgArt.
I'm in the habit of assuming the best of people, and giving people the benefit of the doubt, so obviously while my message was worded in a way to brook no misunderstanding, I wasn't nasty about it. I subscribe to the philosophy of abundant thinking, in life, and in the art community. (Want to know more about these ideas and how they apply to the art industry? Follow one of my art profs, Will Terry.) I think we all learn from each other, and I think there is a place for everyone.
So guess how this artist responded? He was humble, gracious, and apologetic. He explained that three possible clients sent him photos of my work, and asked him to reproduce it for payment. One of the images he received could have easily had the watermark removed and as for the other, I found a source that it could have been pulled from that had NO watermark. (My mistake.) He said he did not realize that these images belonged to anyone and pulled the For Sale post from the neighborhood FB page immediately. I explained to him what I've learned from years in the art industry, selling artwork by commission, and taking custom orders, as well as ideas about Fair Use and what is considered polite in the art community. He was very open to my requests and suggestions, and thanked me profusely for reaching out to him. We had a nice conversation on FB IM, and decided to keep in touch as friends.
A couple of hours later, he let me know he had put up a new post on his page and asked if it was okay. In the post, he credits me as his inspiration to adventure into a new style, linked his followers to DawgArt, and was very complimentary. It was very heart-warming, to have this interaction with another human being. It could have gone very sideways, but it ended up being a wonderful way to connect with an up-and-coming artist.
He actually specializes in outsider art, graffiti style, with an emphasis in fan art. He works on wood, with custom-made stencils and spray paint. So, I'd like to introduce you to Jeremiah Pantoja. Here are a few samples of his work, that you can find on his Facebook page Artistic Lifestyle. You know what a Star Wars fan I am, so I'm sharing the SW stuff, but he does everything. 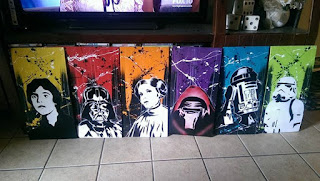 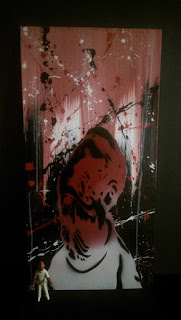 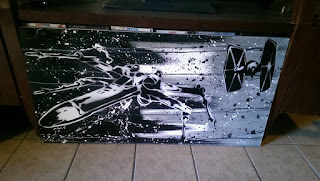 So go check out his work, give him some love, and maybe commission a piece or two at his rock-bottom prices. Someday he'll start charging more, and then you'll be out of luck.
May you all go forth and assume the best of people, keep an open mind, and make new friends.
Posted by DawgArt at 12:23 PM