Marius, the young, healthy giraffe publicly dissected in the Copenhagen Zoo, touched the hearts of many when he was killed. His death, attributed to his lack of genetic desirability, and despite offers of rescue from other sanctuaries, was seen as an outrage by many in the animal advocate community. This image is a tribute to Marius, who proved that one creature, even a silent one, can unite thousands in a common purpose. 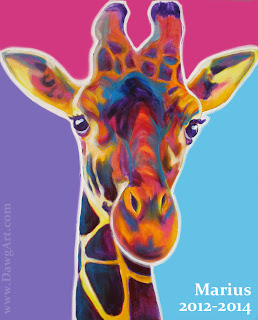 Read more about Marius here.
Posted by DawgArt at 4:58 PM