Things I've Learned From My Cat

My husband's cat is named Kiko.  She wasn't very happy when he brought me into the picture.  And I am not a cat person.

So, Kiko and I have, at best, a love/hate relationship.  At worst, a volatile relationship.  When I first fell in love with my husband, I wrote a horror story about a young couple with a cat.  The story is called "Kiko."  It's creepy and awesome.  And it definitely shows where I thought my relationship with Kiko was going.

That's not to say I don't admire Kiko.  I have learned things from her.  Plus, she's gorgeous.  I mean, look at this face. 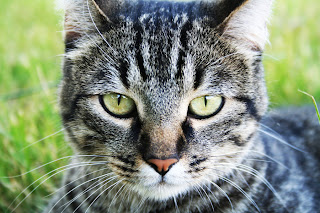 And thus I come to my first point.

Kiko doesn't pretend to care what anyone thinks.  She's gorgeous and she knows it.  She doesn't walk, she glides.  She's elegant, she's svelte, she's mesmerizing.  I find myself watching her silhouette on the window seat.  Wesley Bates once said, "There's no need for a piece of sculpture in a home that has a cat."  And I agree.  Kiko doesn't wait for me or anyone to approve of her, to tell her she's lovely and worthwhile.  She just is.  She is a cat and she doesn't need anyone's permission to be who she is. 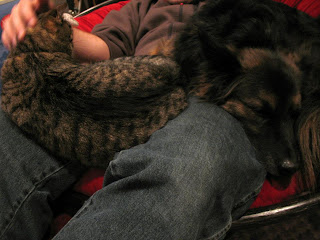 Kiko is a creature of the night.  As such, she will nap when it suits her.  Wherever she wants.  She listens to her body.  She doesn't say, "I need to do this one more thing before I rest."  When she's tired, she sleeps.  When she's hungry, she eats.  She doesn't ignore her needs.  Also, Kiko is quite an independent creature, but when she wants affection, she asks for it.  Directly.  In your face, walking on your keyboard, standing on your forehead direct.  Snuggles are important and when she wants them, she doesn't wait.

Defend Yourself
also
Pick Your Battles 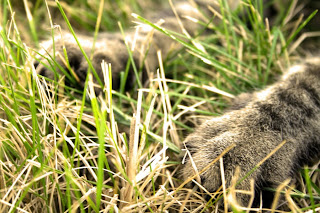 Kiko is domesticated, she is gentle, she is quiet and calm.  But when something threatens her, she has no problem telling whatever it is to GET LOST.  She doesn't cower in a corner and try to hide.  She pulls out those claws and gets to work defending herself.  BUT, Kiko is no dummy.  She knows when she's outmatched.  Instead of staying in a dangerous situation she can't handle, she'll find someplace safe to regroup and decide what her next move is.  She isn't bogged down with anxiety or fear.  Kiko is a cat of action.

Know When To Let Things Go 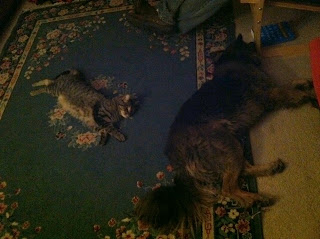 Kiko was not happy with us or with Toby when he first joined the family.  It took several months for her to get used to the idea that he wasn't going anywhere.  It also took a long time for her to trust Toby.  But eventually, she gave up her grudge.  She now snuggles with Toby when it suits her and has forgiven us for the infraction.  She is an extremely adaptable being. 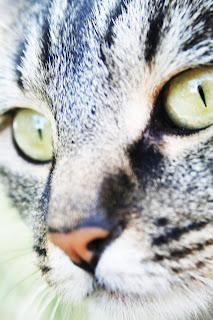 Cats have large predator eyes, and Kiko's are no different.  She studies things in their seeming minutiae.  It's almost as if she spends most of her time just figuring out the way things work.  She doesn't butt into conversations, doesn't interrupt people when they're speaking, doesn't dominate the room with her incessant self-absorbed chatter.  She just watches, listens, learns.  When she decides to act, it seems as if there is no question in her mind about what she's going to do and what she expects to happen.  People pay attention.  And then she can be completely spontaneous, reacting to unexpected situations with complete confidence. 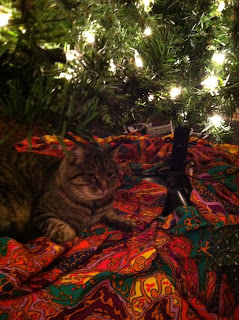 Whatever the season, Kiko finds the best spot and claims it.  During the holidays, it's under the Christmas tree.  During the summer, it's in the middle of the cool, dry kitchen tiles.  Whatever her goal is, Kiko finds the best spot to accomplish that goal.  She doesn't compromise.  They say you get what you think you deserve.  Evidently, Kiko believes she deserves the best, because that's the spot she gets.  Every time. 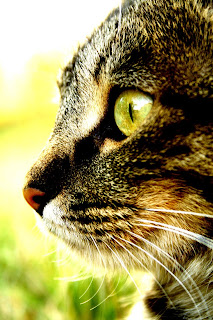 Seriously.  I think she does this.  Also yoga.