Happy Fourth of July! and also: Remember When I Used to Blog?

It was never a really consistent thing, but it used to happen sometimes.  Here's what's been going on:

Planning and organizing my final show (Lost and Found) in Utah for 1.5 years.
Moved in October.
The holidays.
Last semester of college in a very competitive art program.
(UTAH VALLEY UNIVERSITY'S ILLUSTRATION DEPARTMENT IS AMAZING.  I love Will Terry, Richard Hull, Perry Stewart, and last but certainly not least, Don Seegmiller.  Seriously.)
Hanging and doing the Puppy Love show in February.
Painting like mad to finish Lost and Found.
Hanging and doing the Sora show in March.
Painting like mad.
Hanging and doing the Lost And Found show in April.
Finals.
Graduation.
Commissions.
Guess what? We're moving again, this time out of state.
Moving in April.
Looking for accommodations/work/galleries in Tempe, AZ.
Going back to Utah to get the rest of our stuff in June.
My purse was stolen during the OUT OF STATE move.
Behind on everything because of the purse and everything I had in it, including of course, money.
Commissions.


And now we are up to speed.  I will start posting here again.  I do like blogging.  It satisfies, if only a little, my need to WRITE.  Here is a painting I did about a billion years ago.  Actually, it was eleven years ago, but that's about a billion, right?  See how awful it is?  Art school was good to me.  Actually I'll post another painting I did this year, so you can see them side by side. 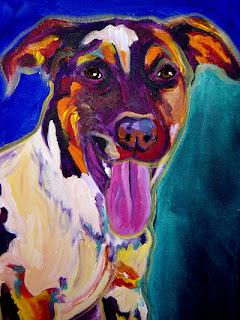 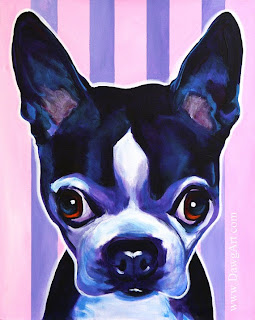 So you see what eleven years of painting and five years of art school (three of them intense illustration study) can do for your art?  I've made hundreds of DawgArt paintings.  And some of them sucked.  I mean, really awful.  Lots of them were mediocre.  I was learning as I went.  But now, I can look at some pieces I've done in the last couple of years and I can say, "Okay, these are good."

They make people smile, laugh, engage with the artwork and with each other.  The paintings make people think and share and learn something, about themselves, about animals, about how they relate to animals. I mean look at these photos of the Lost And Found show: 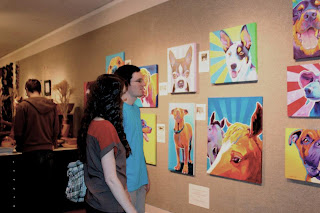 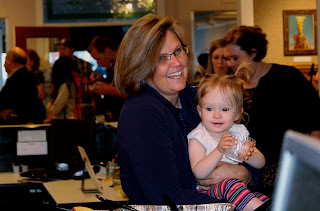 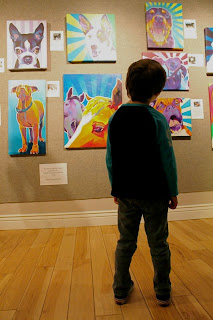 These photos make me feel good, because they show me how people interact with the artwork and then with each other because of the feelings engendered by the paintings.

I don't know how this went from "I've been busy" to "I'm pretty awesome," but I guess it can't hurt.  With all the frustrations and stress over the past six months, it's nice to find some positivity inside me still.  Especially when I can't sleep at 3:43 am.

The Lost And Found show raised thousands of dollars so far for rescue, and the unsold paintings will yet raise more.  I feel good about that.

I'm still looking for gallery representation here in AZ, for venues to have shows, for a solid situation for me and my family, for the good karma I've hopefully been building to come back around and make my fortune, so I can send my kids to college.  But I won't give up.  I can't.  Not when there's millions of animals euthanized every year.  Not when there's a gallery SOMEWHERE out there in MetroPhoenix that will want DawgArt.  Not when my eight-year old just lost both his front teeth, and thanks to his dad's genes will have a trainwreck in his mouth soon that will need braces.  Not when there are still people out there who don't know about DawgArt!