Today I will start painting the first piece in the Lost & Found series, a gallery show of paintings that will benefit rescues worldwide.  Visit Indiegogo for more information, to contribute to the project and to share the project with others!

My first subject will be Miracle, rescued by Illinois Doberman Rescue Plus. 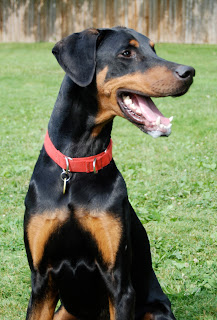 Here is Miracle's story, as written by Lauren Kelliher for a press release (photos courtesy of IDR+ Facebook page):

Illinois Doberman Rescue Plus (IDR+) is amazed at the outpouring of support from all over the world for an emaciated stray that came into the rescue three weeks ago.

"I've got over 20 years in this line of work, and have seen my fair share of emaciated cases. His original condition, recovery, and the public’s reaction to him is just beyond words," said IDR+ volunteer Andy Ivanicky.

Word spread about the emaciated stray, and thousands of people wanted updates. The IDR+ Facebook fan page was inundated with comments and posts of support for him. The main IDR+ website overflowed with donor acknowledgements. People could not get enough photos and videos of his progress. Emails, letters, packages and Facebook comments from dog lovers came as far as Alaska, Hawaii, England, Spain and Australia.

“As rescue volunteers, we are familiar with people rallying around a particular animal in need, but the outpouring of support for Miracle is a reminder of why all rescuers do this,” said Lara Trapp, IDR+ treasurer. “We are so grateful to those who have provided for his initial care and allowed us to do what we do best and hope those people know how much their donations and well wishes have helped.”

On January 11, IDR+ received an urgent call about an emaciated Doberman who was found in an alley. Animal control did not think he would make it, but IDR+ offered to give him a chance, so he was rushed to Animal Medical Clinic of Joliet. 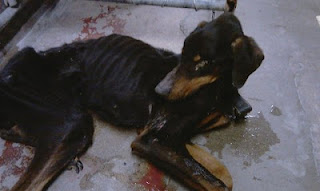 “We honestly did not know if he would survive the car ride to vet. All we could do was hope,” said transporter Nikki Koth. “The whole car ride I just kept petting him and trying to keep him warm. I kept saying, ‘please just make it there.’”

When he first arrived at the animal hospital, his temperature was so low it did not even register on the thermometer. Some people wondered if euthanizing him would be the kindest course of action. He could not lift his head, and his eyes were sunken in. He weighed 33 pounds; nearly 60 pounds underweight for a healthy Doberman of his size. 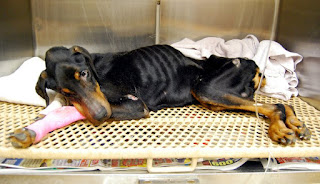 “I estimated he had less than two hours to live,” said veterinarian J.A. Etsinger, DVM. “He was hypothermic, semi-comatose, hypoglycemic, and extremely dehydrated.”

Dr. Etsinger and vet tech Kathy Harding put him on a heating pad and gave him warm IV fluids and antibiotics even though his veins were collapsed. Within a few hours of veterinary care, his temperature registered at 98 degrees (it should be 102), and he started showing signs of life.

Miraculously, the dog survived through the night, so he was named Miracle. He continued to make enormous strides toward recovery. Miracle started drinking water and eating food; he lifted his head. 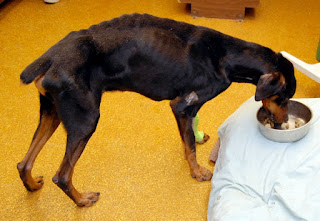 “I think everyone involved, including myself, was hopeful, but I don't think that anyone was optimistic considering the grave condition he was in,” said animal rescue volunteer Dawn Sutherland.  “I was elated with the progress he made.”

Over the next week, Miracle gained strength and reached some milestones. He ate 12 cups of food a day, and he showed a strong will to live. Dr. Etsinger and Harding stood him up with support and slowly increased weight on his legs.  Miracle was soon able to stand, walk, and bark. It was a few more days before he wagged his tail. 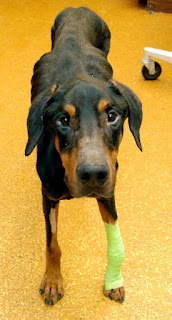 "I never thought I'd be so happy just to see a video of dog eating," said IDR+ adopter and volunteer Tasha Huebner, who followed his progress on the IDR+ Facebook fan page.

Usually, when dogs endure this amount of trauma, their internal organs begin to shut down, and that was a concern for Miracle. However, his bloodwork indicated no major red flags, and the only issue the x-rays showed is that he had apparently eaten some wire. Miracle had a serious puncture wound on his front leg that is still healing. He also had other deep skin sores from lying on concrete. 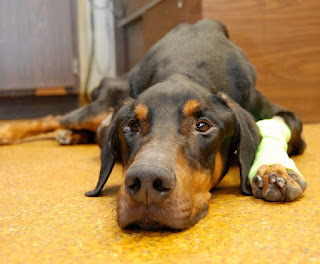 “Miracle already has several adoption inquiries, but he will not be ready for adoption for a while yet,” said IDR+ President Pam Abare-Newton, who is now fostering Miracle in her home. “He still has several months of recovery including three surgeries to fix his entropian eye, remove the wire, and neuter him.”

Everyone is pulling for Miracle’s full recovery. One Facebook poster requested a t-shirt for people to show their support for Miracle, so IDR+ designed one and made it available at www.cafepress.com/MiracleDoberman. Several people offered to donate percentages of their business sales to IDR+ in honor of Miracle. Doberman groups all over the country were abuzz with his progress and organized donations of their own. 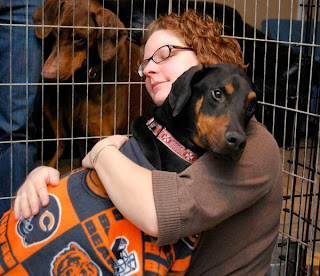 "Miracle makes you realize that there is hope and there are good people out there. He is an inspiration and watching his progress touches my heart every day," said IDR+ Board Member Kristen Carey. 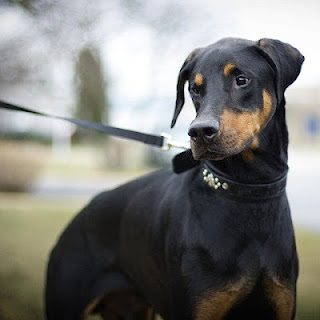 Miracle has since made a full recovery and been adopted into a forever family.  His ability to survive, thrive and continue to trust and love is a testament to the power of his spirit and the tireless work of the caring individuals working with Illinois Doberman Rescue Plus to save his life.  The proceeds from the sale of Miracle's painting for Lost & Found will go to IDR+ for direct care of the animals currently in their care.  Follow along here at the DawgArt blog and on Facebook for updates on his and other Lost & Found paintings!
Posted by DawgArt at 2:52 PM