It's About That Time

You've probably noticed, I'm much more active on Tumblr, Facebook, and Insta than I am here.  Social media is just easier, ya know?

Also, I was talking with Geary about my creative cycles and we hit on something very interesting about my most productive periods of the year, and in spite of painting on commission during those months, the holidays are my creatively fallow period. So I go a little radio silent during those times.

But here I am!

And to tide you over, I offer here a DawgArt image the likes of which have never been seen before! 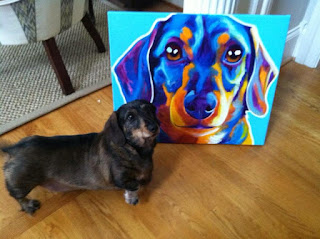 Not really. You've seen stuff like this before from me. But look at this roly poly little guy posing with his portrait. Make you want your own, right? Portrait I mean, not dachshund. Or, I dunno, maybe you do want a dachshund. Then you could get it painted!

Anyway, love you guys and I'll check in again soon.
Posted by DawgArt at 4:10 PM