*Update 19 Sept 2015: We succeeded in raising hundreds of dollars for WildCru. Thank you for all of your support!

"My name is Alicia from Dawgart and this is a painting I made of Cecil the Lion. We are doing a fundraiser to raise money for the Wildlife Conservation Rescue Unit aka WildCru.org which is the program that was monitoring Cecil. We're going to donate 80% of the proceeds from the sale of this piece.

I hope to raise awareness. When you look at the numbers of how many are left it's staggering. Animals have a lot to teach us and their energy is so pure and vibrant and that’s what I try to capture on canvas. There’s been a lot of outrage over this incident. I’m the type of person that likes to propagate love instead of hate. That’s what my artwork is about. I would hope that instead of people rising up in hate, they would rise up together to accomplish a goal which would be to preserve these animals for future generations. The only way that we’re going to be able to save some of these species is if we make a concentrated effort to do so."

A beloved African lion named Cecil, who lived in the Hwange National Park, was illegally baited away from the park and killed on July 1st, 2015. Cecil, with his black-fringed mane, and the rest of his pride, have been studied by the Wildlife Conservation Research Unit (WildCRU) in a program that has run since 1999. Cecil's movements have been monitored by tracking device as part of the study since 2008. Cecil's death has resulted in public outrage all over the world. 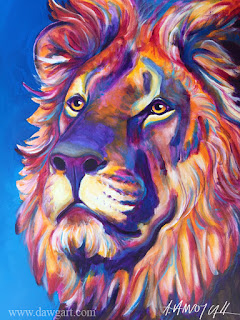 As an animal advocate, I found Cecil's death to be disturbing, bringing to the forefront of my mind the delicate and precarious hold that these big cats, and other endangered animals have here on
Earth. I am sickened by the idea that my grandchildren could live in a world where these animals no longer exist.

As a painter, I often focus on the natural world and our relationship to it. I use bright colors to convey the intense energy these creatures embody. Through the colorful palette, I hope to capture the essence of living things, their purity, and their vibrance.

I've created a painting of Cecil.


This piece was painted to honor the memory of Cecil the Lion, and to raise money for the Wildlife Conservation Research Unit (WildCRU), an organization dedicated to the conservation and preservation of these animals.

80% of the proceeds from the sale of "Cecil" will be donated to WildCRU. 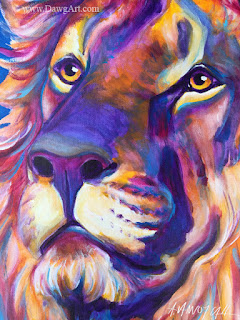 The piece is 16x20 inches, acrylic on canvas, wired and ready to hang.

If you can't afford original art, you can get a print of Cecil's painting here in the Etsy shop. A portion of the proceeds from the sale of prints will also be donated to WildCRU.

Please share this post on all your social media outlets and help spread the word!
Posted by DawgArt at 2:30 AM